To celebrate the sixth anniversary of Eastern Ear and our live series, Plink Plonk, join us for a very special afternoon of music from:

Oren Marshall is a pioneering player of acoustic tuba and electric tuba who, crossing between classical, jazz, improvised and world music, has collaborated with the likes of Derek Bailey, Charlie Haden, Sir Peter Maxwell Davies, Moondog, Radiohead, Hermeto Pascoal, The Pan-African Orchestra and the London Philharmonic.

He has played with every major orchestra in London as well as with the Bolshoi Theatre Soloists, the Frankfurt Radio Symphony Orchestra and the Canadian Ballet. As a member of London Brass (whom he joined in 1987) he has made numerous recordings, toured worldwide several times, played 6 Proms concerts and performed for The Queen, Prince Charles, the German Chancellor, the President of China and The Pope.

Amongst the many Duos Oren has played are performances with Jazz pianist John Taylor, New York Beatboxer Adam Matta, UK Beatboxers Shlomo and Hobbit, Prepared-Piano player Hauschka, Percussionist Evelyn Glennie and multi award-winning vocalist, Bobby Mcferrin.
As a solo artist, Oren has played all over the world and his ground-breaking solo work lead to multiple nominations for the BBC Innovation in Jazz Award.

He has also shared the stage with artists such as Gil Scott Heron, Roy Ayers, Moby, Vinicio Caposella, Murcoff, Tomasz Stanko and Sleepytime Gorilla Museum. He leads and writes for the Charming Transport Band, bringing together master musicians from Ghana and Nigeria and innovators from London’s jazz and improvised music scenes. Oren is currently Head of Brass Studies at Trinity Laban Conservatoire, London and teaches on the Leadership course at the Guildhall School of Music and on the Jazz course at the Royal Academy of Music. 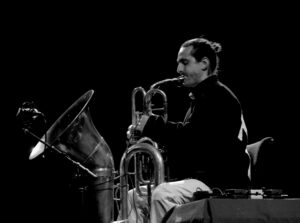 Louie Rice and Luciano Maggiore work together as NO PA ON, performing score based works – both acoustic (without a PA system) and amplified (with a PA system). The duo was originally conceived to perform works by other artists as part of an event series at Cafe OTO in London. This series acted as a research period that went on to inform the action-based pieces that Rice and Maggiore are now writing themselves. These pieces explore physical actions and vocalisations in response to pre defined prompts or rules, and could best be described as ‘two people, in a room, doing something.’

Both their solo electro-acoustic practices and other collaborations have brought them each to appreciate auditory phasing, and expanding the spatialisation of sound beyond the stereo field. Together they aim to reach beyond the confines of electro-acoustic music; to develop a type of action that references conceptual and performance art, folk singing, dance choreography and minimalist composition, amongst other things… 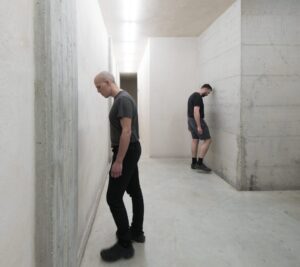 £By Donation in advanced via Eventbrite here, or on the door.